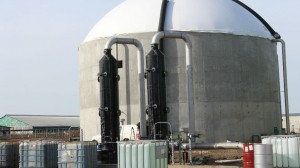 This is yet another good idea that was perfectly applicable to our farm, and which we did not hesitate to use. The presence of 6,000 animals in our farm naturally leads to a large amount of organic waste. We use a part of it to fertilize our crops, but most remain unusable. With the advancement of technology, we decided to seize the opportunity and turn organic waste into energy. We are proud to say that at present our farm has two fermenters and two generators with a total output of 1.5 megawatts.

The biogas is produced by processing residual waste from a livestock (manure and uneaten food), a food production (fruit and vegetable waste, residues from meat, fish and dairy products and etc.) and a liquid waste. By building plants for biogas production, agriculture has an important contribution to energy supply from renewable sources, such as for the organic waste destruction, since the natural fermentation of organic waste in the air produces methane, which at the same concentrations in the atmosphere creates 30 times greater greenhouse effect than the carbon dioxide.

A biogas is produced by anaerobic digestion of organic materials in sealed fermenters. This involves the use of bacteria that synthesize methane (in the complete absence of oxygen) from hydrogen and carbon dioxide. In order to maximize the extraction of methane, various types of waste and water should be mixed in suitable proportions by special mixers. More than half of the resultant gas is methane, and the rest is carbon dioxide and small amounts of other impurities. The cogeneration power plant converts methane into electricity and heat. The biogas is completely environmentally friendly and the CO2 – neutral.

* It is believed that the microorganisms involved in the fermentation reactions are among the most ancient living organisms on the earth, called “archaebacteria” and appeared long before the period, during which start to be carried out the photosynthesis process.

The benefits from the production of biogas